As a hardcore radical feminist, few things make me madder than men, penises, phallic-shaped objects, such as cacti: 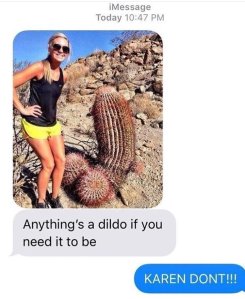 Besides those things, I am triggered by misinformation, unless my goddess Hillary Clinton uses it to dunk on the Patriarchy. When men do it, though, I can’t even. I curl up in a corner and start just projectile vomiting all over my bathroom, and I make sure I eat a few bowls of oatmeal beforehand so I can really cake the walls with it.

We feminists invented #MeToo to let everyone know how predatory the evil men are. One time, a man looked at me, and I immediately hit him with the bear mace, and then used the bear trap, and his MGTOW bus-driver ally forced me to get off the bus, but I hashtag-resisted by kicking and screaming as the police tasered me. They probably only did because I’m a woman, even though one of the officers was a Latina female. Traitor to the female race.

Because of our use of #MeToo to slam dunk males into a garbage dumpster, men and their traitor-female allies have been riled into a hysteria over it. Just a week ago, Norm McDonald said “#MeToo is straight trash, nigga. Miss me wit that shit.” and Netflix gave him his own show!? Jesusa Christina. I’m already triggered, but anyway, since people flip out about #MeToo, they get outraged and start circlejerking each other about how it’s “just for attention”, and how “they’re probably lying”. It spreads like wild-fire, and they all go through their alt-right network re-hashing the same stuff over and over again until it’s so tired that it falls into a Rip Van Winklesque coma.

This recently happened when I came across Chadwick Moore’s website, Dangerous. It’s a very dangerous website because you log on and take your own life into your own hands because there’s a chance you’ll accidentally click a link that plays a video that, once you see, a Japanese ghost-girl comes into your house and torments you for days until you kill yourself. 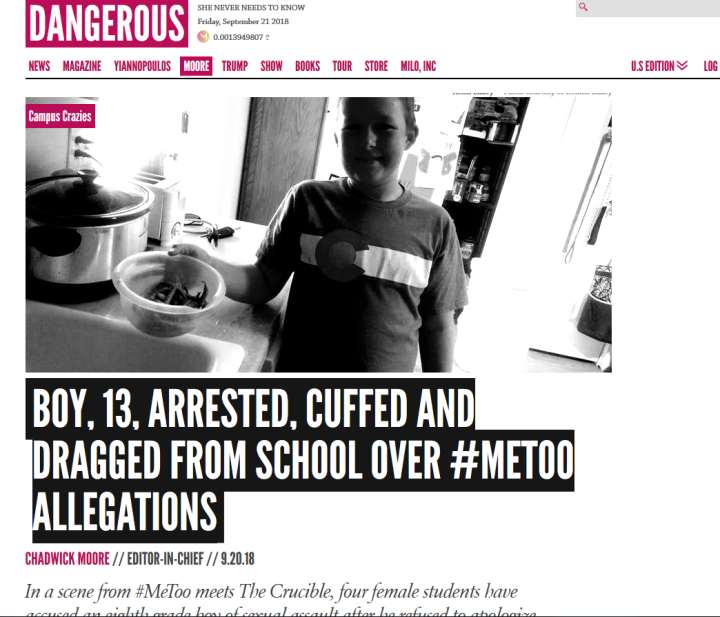 Pictured above: The headline that made its way to far-right circles, and a youtube channel called “MGTOW School”. I’m not sure what MGTOW classes are like, but it’s probably something like “Just chop your dick off, it’s just an instrument of weakness guiding you towards those wastes of time known as ‘women’.”

Here’s a synopsis of the story: an innocent white boy from Colorado Springs who dindu nuffin was accused of inappropriately walking up to girls and grabbing their muffins. According to the father, his son is “only 14” (or is it 13?) and is too stupid to be a predator. He’s just too dumb to know what he’s doing. Now, the father has started a fundly to raise money for a legal defense fund, because his son got arrested over this.

Here’s the story in a nutshell:

Interrogated by teachers? Accused of sexual assault by girls who want drama? Put in handcuffs by the cops? Wow. Poor kid. He didn’t deserve any of this bullshit, and there is going to be Hell to pay for this outrageous misuse of #MeToo, where females begin using accusations of sexual assault as a weapon against men, and now it’s hit this poor little kid, who is getting persecuted over nothing. Please help us, Donald Trump.

As you know, the media jumped all over this story like…

Wait, the media didn’t say anything about this. I did a quick search for this story using the kid’s name, the father’s name, and various other things, and couldn’t find any information on this incident except for the story on dangerous dot com, and the fundly page. So, I thought to myself, “Okay, maybe this happened a month ago and the story got buried.” and tried to put together a timeline of when the incident actually happened because the story on Dangerous left out very important details, like dates and places. Now why would they do that? Is it that they were so desperate to put out this story that they failed to get basic facts straight before publishing a story?

What I gleaned from this was: This happened in Colorado Springs somewhere, no local news outlet reported on it, no other news organization reported on it, and it was a 60-day kickstarter, and I found this in the very early morning of the 21st. 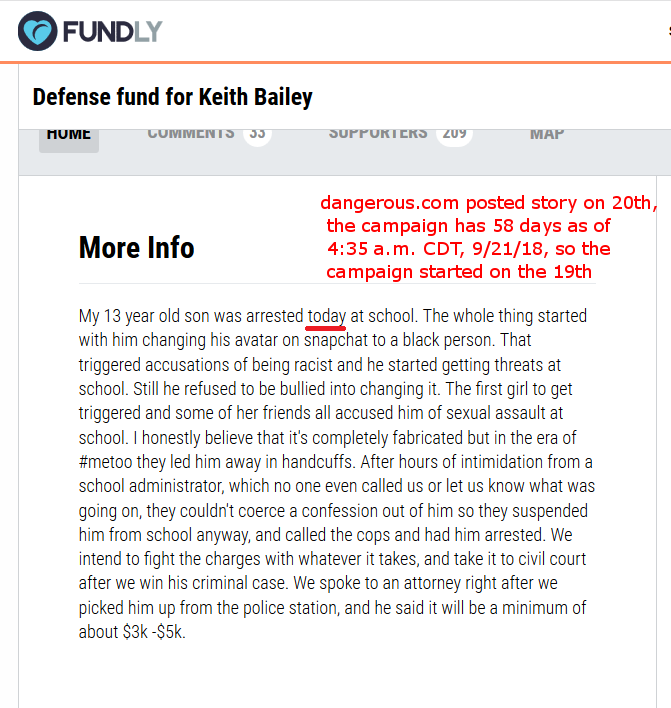 Dangerous posted the story on the 20th, and the campaign started on the 19th. According to the father, the fundly page was started the same day as the arrest occurred. As of now, the fundly has raised double of its 5k USD goal and is still up.

Why is it still up? Does he need more money? The attorney gave a range of 3 to 5 thousand dollars. I know legal fees can cost a lot of money, because I’m constantly suing hot-dog vendors for giving me phallic-shaped foods as sexual innuendo. But something keeps bugging me… why is no one else reporting on this story? The only ones commenting on it are linking to the dangerous dot org website, and Dangerous links to the fundly page only. There aren’t multiple sources confirming that this happening. So I decided to check out the Colorado Springs police blotter, and the El Paso county, CO court records, and guess what? No mention of this case or incident.

There are no local news channels covering this, no police reports of this, no court records of this.

So why would Dangerous report this? What even is Dangerous? Is this a fake-news site like mine? Who wrote the article? A man named Chadwick Moore:

Yes, the internet-right is filled self-promoting ego-maniacs, but luckily, we have Chadwick Moore on the case, who is leery of people who crowd-fund “like drug addicts”. He just likes to sit on the sidelines as the editor-in-chief of Dangerous, a website that employs famous sideline-sitter, Milo Yiannopoulos. But that’s Milo. Not Chadwick Moore, who doesn’t self-fellate over seeing himself in print or making actual differences in the world, or make his twitter header a picture of himself drinking Chick-fil-A on Fox News

In conclusion, as more idiot right-wing talking heads circulate this story, just remember, there is no information about the school, no media coverage besides this one source, no arrest record, no police report, no court records, but is probably not a scam to milk hard-working conservatives for their outrage-shekels. Because, who would do that? Nobody. This is completely legitimate.